High Times have released their Top Ten Strains for 2014, compiled by editor in chief – Danny Danko. The list of strains includes both High Times Cannabis Cup Winners and medical cannabis seed strains, some of which are stocked right here at the Attitude Seedbank.

We would like to congratulate all of the winners and especially our friends Sin City Seeds, BC Bud Depot, Hortilab Seeds, Alphakronik Genes and Big Buddha Seeds.

Seeds Sin City Seeds made the list with Sin Mint Cookies – a strain with sought after GSC (forum cut) x Blue Power genetics and Potent, Frosty nugs with improved variations of the Cookies.

Alphakronik Genes Seeds Dawgfather made it with the Medical Cannabis Strain Chemdawg D with the pain killing effects of the Sin City Kush. Testing has shown that The Dawgfather helps relieve the symptoms of pain, nausesa, Crohn’s, insomnia, anxiety.

BC Bud Depot Seeds also topped the charts with their brand new release CBD God, BC God Bud X Harlequin Bx4 – another medical cannabis seed strain which contains high levels of CBD (hence the name). CBD God has been created by crossing the cannabis cup winning BC God Bud with the legendary medicinal strain that they recently created a seed version of, the Harlequin Bx4.

Hortilab Seeds made the cut too  with their cannabis cup winning Sour Amnesia. This American Sour Diesel crossed with the Dutch Amesia won 2nd place best sativa at the 2012 High Times Cannabis Cup. This strain has a pretty big following so it definitely deserved its place on the list.

Another great strain which made it was the cannabis cup winning Tue OG by Elemental seeds. We are pleased to announce that we will be stocking Elemental Seeds VERY soon, so please keep checking back to the website. We are sure this cannabis cup winner will fly off the shelves.

Amongst others, Gold Coast Collection made it with White Walker OG. This particular strain started making waves in 2013 when it won 3rd Place for the Indica Cup, and Archive Seeds with their genetics Fire OG x Face Off OG bx1, aptly named Hellraiser OG. To see the rest of the breeders (La Plata Labs, Homegrown Natural Wonder and Big Buddha Seeds) that made the High Times Top Strains, check out their video below! 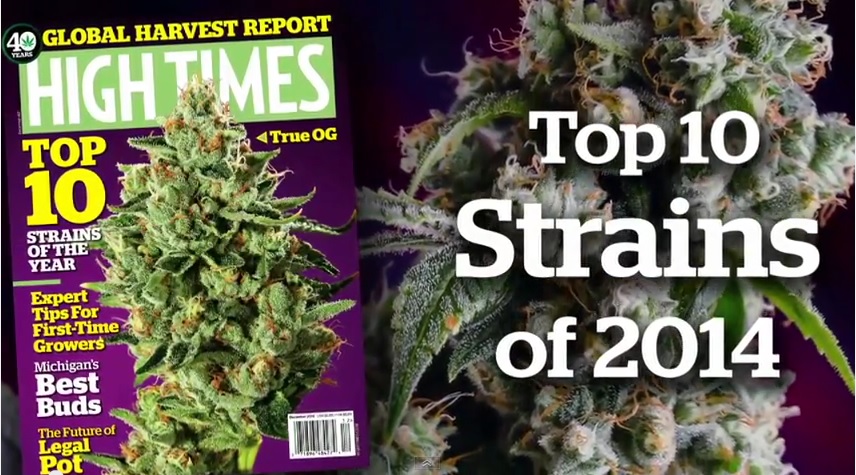