You may or may not have heard about prop 64 – the new proposition that is thought to essentially overwrite the existing prop 215.

This new California Marijuana Legalization Initiative has left unsettling ripples throughout the marijuana community with the most serious concern being Prop 64 will open the doors to multimillion agriculture corporations and drive smaller cannabis farmers out of business. Most Californian marijuana farmers have staked their entire lives in farming these crops, and some of the growers being 2nd and 3rd generation farmers. It seems it’s becoming quite clear that they won’t support Prop 64 until they are assured that the upcoming ballot initiative will benefit them and you can’t really blame them.

Another major concern with Prop 64 is the detriment that could be caused to medical marijuana patients. Dennis Peron, the original Proposition 215 California legalization pioneer is in Humboldt County advocating against Proposition 64 and its measure to legalize cannabis for recreational use. He believes the proposition is the government’s way of undercover extortion and will turn the marijuana industry into a profit-based culture instead of a compassionate one.

Peron states “I proposed 215 to help sick and dying people at a time when cancer and AIDS patients were being criminalized for their medications,”

He said people in California are confused about the implications of Proposition 64, which calls for the regulation and taxation on cultivation through industry licensing and standardization of cannabis products. This law would also legalize marijuana under state law but limit consumption for adults age 21 and older.

“People don’t realize that money is a form of tyranny. You pay them and you won’t get busted, that’s how they control people and this will force an even greater underground market to form,” Peron said. He also made a further interesting point of saying that people who use marijuana for medicinal use were being trivialised as this is a way of life for them, not a fun pastime.

“They made up recreational to demonize and trivialize the people who use marijuana. People who use cannabis for medicinal uses aren’t getting high, they’re getting normal from the treatment,” Peron said, “Prop. 64 is a misrepresentation of what marijuana is primarily for, and this kind of legislation will hurt a lot of people, especially small growers and businesses who are trying to provide to their clients but can’t afford to because of the excess regulations and taxation on their products. I want the voters to be aware of the situation at hand,” Peron said. “Prop. 64 is not legalization. If it were legalizing that would imply that marijuana is illegal and it’s not. This law would mean the displacement of cannabis farms in Humboldt. It essentially empowers profit instead of people.”

In the mid-1990s, Peron co-authored and heavily promoted Prop. 215, also known as the Compassionate Use Act of 1996. It was approved by voters and enabled marijuana to be a recommended medication by doctors to their patients and also permitted cannabis to be grown and sold in California.

According to CaliforniaChoices.org, proponents of Prop. 64 believe that this measure would create a safe legal system for adult use of marijuana and that it will reduce law enforcement costs and increase tax revenue, benefiting California by more than $11 million in the next decade.

Peron argues Proposition 64 was supported by law enforcement, lawyers and judges because it would make it easier to prosecute and “bust” people.

However, it is not viewed as all doom and gloom. The prop, which will legalize cannabis for adults aged 21 and over to possess, carry, share and grow in small amounts for non-medical, personal use. As with every marijuana bill passed, using marijuana in public will remain illegal as will driving while impaired. Legalize CA states that revenue generated by the business and passing of 64 will eventually reach over $1billion, with $100 million annually due to reduce incarceration costs!!! That’s a whole lotta dough!

This revenue will be generated by a 15% rise in cannabis tax, including cultivation taxes for both flowers ($9.25 per ounce) and trim ($2.75 per ounce). These taxes will obviously either reduce farmer’s profit margin or increase costs for consumers and patients in the retail environment. 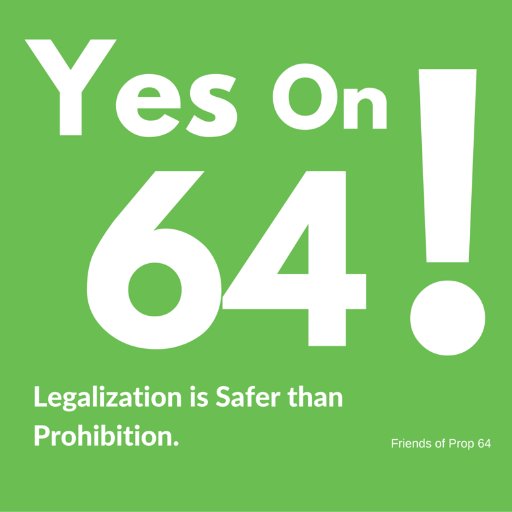 It is bad news however if you are a medical marijuana patient. Paradoxically, 60 of the funds will be directed towards youth substance abuse prevention, treatment, and education. Controversially, 20% goes to helping state and local law enforcement!!! Do what? Bust people for possession? 20% will be put to good use and will be used for environmental restoration, clean-up, and enforcement efforts. Additionally, a portion of revenue will be allocated for medical marijuana research and to studying implementation outcomes. It seems that this revenue could be equalled out a little more right?

It will also apparently favour small scale producers and keep large corporations from coming, kicking their boots off and making themselves at home… Did they think we were born yesterday? Money talks and this is why the small scale operations will only be favoured for 5 years. Then the big guns can come in and do whatever the eff they like!!!

Megacorp – If Prop 64 passes, the State of California will begin selling Type 5 cultivation licenses to large corporations in 2023.

If [the market] is captured by a small number of…large growers, there won’t be much choice…than to continue to engage in criminal behaviour. – Hezekiah Allen, Executive Director of the California Growers Association

There will also be other expenses for the small scalers too, with seed to sale tracking which includes regulations requiring farmers of all sizes to implement a seed-to-sale tracking system.

Unfortunately, such tracking databases and the technology required to run them aren’t cheap. Even California’s smallest farmers would be required to implement the system, many of which will find it cost prohibitive

Also a big expense will be the cost of environmental compliance – Proposition 64 includes relatively strict environmental protections (no surprise from California, one of the most progressive states in the nation). The cost of compliance with these regulations, including inspections, may be prohibitive for many small farmers.

Above all the biggest negative is….cannabis will still illegal by federal level – Cannabis has been illegal at the federal level since August of 1937. Even if Prop 64 passes, California’s cultivators will remain vulnerable to prosecution from federal authorities like the Drug Enforcement Administration (DEA) and the Justice Department.

However, it ain’t all bad, and a really good side of 64 is that it will legalise industrial hemp production -

And, prop 64 proposes to help alleviate the currently overburdened criminal justice system. Passing Proposition 64 will get many people out of jail throughout California and clear their records. It will also treat marijuana use as a public health issue rather than a criminal one.

It seems pro 64 is one that is so multi-faceted with so many pros and cons. Current polls indicate a 60% approval rating for Prop 64, California’s ballot initiative to legalize adult use cannabis.

At the moment, it seems like there is more negative stigma attached to this with many donors and supporters that are not in the least interested in marijuana and it cultivations. In fact some supporters who are voting yes have said they ‘abhor’ anything to do with marijuana.

Thanks to The Cannabis and Legalise CA.