Well done Scotland! Bravo, Bravo! It seems that we should take a lead from our ‘brothers up North’ in terms of cannabis legalisation.  The Scottish National Party (SNP) delegates have backed a motion in favour of decriminalising cannabis for medicinal use. However, it certainly wasn’t a unanimous vote, with opponents issuing the same old ‘concerns’ that have been flogged to death, about cannabis being a potential gateway drug but the party members want the UK government to devolve power over the class B drug to the Scottish Parliament.

As it currently stands, possession and supply of cannabis can lead to a hefty fine if not a jail term. 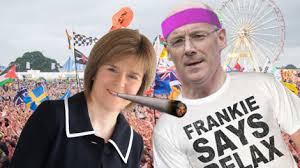 Also making a stand on the issue was Laura Brennan-Whitefield who has been living with multiple sclerosis. She talked passionately about how medical marijuana may already be used (albeit not publically) to ease the pain that MS causes.

Ahead of the conference vote, Ms Brennan-Whitefield asked the party to show “compassion and common sense”.

She concluded that people have been using cannabis to self-medicate for years, making a further risk to their health, considering the fact that they could be arrested for trying to alleviate their symptoms.

Ms Brennan-Whitefield stated “I have been living with multiple sclerosis for nine years and the fact that I’m standing here giving this speech means I am one of the lucky ones. It has become very clear to me over these last nine years that many people living with MS have been using cannabis to help with the symptoms of that condition, in fact it’s one of the worst kept secrets at the hospital. All of these people risk a criminal record, unlike in Australia, Chile, Canada, Finland, France, Germany, Romania and some US states.”

It was clear that the opposition do have seemingly strong views about where the legalisation of medicinal cannabis would lead, with Councillor Audrey Doig voicing her disapproval. She condemned the motion, saying “Nowadays people are looking for quick fixes as far as pain is concerned, and they look for quick fixes when the pain medication doesn’t work and they go on to stronger pain killers. How do I know this? I had a cousin who died a number of years ago in Canada. He started taking cannabis because he was having pain when he was playing ice hockey and his mates in ice hockey did the same.” We are not sure that everybody should be grouped together, and just because her cousin developed a drug problem, it doesn’t mean we all will. Interestingly, she didn’t state which drugs he moved onto. It could have been a legalised painkiller for all we know! She said there were alternatives to pain medication including taking up keep-fit programmes.

To be fair though, I am not sure that all of The United States estimated 2,604,079 medicinal cannabis users would agree with what she is saying. (And that 2,604,079 are just in the USA Alone, not including all the other countered where MMJ use is legal!) And she did not take into consideration that people with muscle wasting illnesses may not be able to exercise so her opposition points were not too strong and a bit of an insult.

The SNP delegates’ overwhelming vote came just weeks after former Conservative justice minister Crispin Blunt said he had been told to stop asking difficult questions about drugs policy while he was in office.

Mr Blunt told a fringe event at a Tory conference that he had been rebuffed for asking how much policing drug prohibition costs – and told in ministerial discussions that it was “impolitic” to raise the issue.

The vote does not necessarily mean the Scottish government will adopt the policy but it gives an indication of strong support for the measure within the governing party.

Labour leader Jeremy Corbyn has said he would like to legalise cannabis for medical purposes and that the UK should have a debate about changes to other drug laws! Let’s see how this goes, as it may be a step in the right direction for drug legalisation in the UK.

Thanks to Vice , BBC NEWS, The Independent