The Science of the Dank Smell 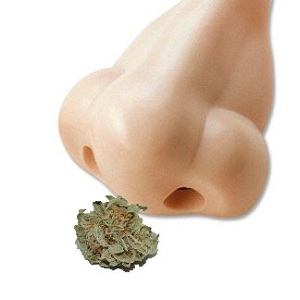 The smell of marijuana…that distinct earthy smell that makes your nostrils tingle as soon as you get even the smallest of whiffs…Its such an intense smell and all part of the smoking ritual that the smell is even mentioned in some song lyrics.  (Cypress Hill  (Hits from the bong) Still it, goes down smooth when I get a clean hit of the skunky funky smelly green shit)

There are many different adjectioves to describe the smell of your weed, a few of the buzz words that we keep seeing are:  Diesel, Pine, Strawberry, woody, spicy and Blueberry…I have even seen one type of weed as being described as so stinky ‘Like rotten meat’!!! So we understand it is a relative point when sussing out your chosen product. 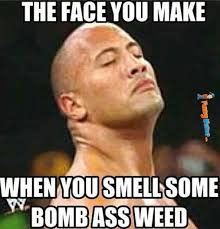 If these esters are essential to producing banana, strawberry and pineapple aromas that make the market’s most popular strains smell so great, why don’t they show up on the radar of most cannabis labs? Banana volatiles like 2-methyl-4-heptanone and hexyl acetate are not very abundant in the fresh or dry cannabis flowers, sometimes at levels 200 times less than the most abundant terpene in cannabis, beta-myrcene. It takes a sensitive and expensive analysis to detect these chemicals, but most importantly, the labs need to know what compounds to look for.

When an odorant molecule enters the nose, it binds to a variety of different olfactory receptors at different strengths creating a “combinatorial code” that defines a given scent. The combinations are almost limitless, making it almost impossible to predict with certainty how a given molecule will smell by simply looking at the structure. For example, according to research from the University of Nice in France, the combinatorial code that “unlocks” a fruity smell is: OR1A1, OR1A2, OR1G1, (Please see Hightimes for a full list)
It’s feasible that a certain mixture of several compounds could elicit a strawberry, pineapple or blueberry aroma without actually containing any of the chemicals present in the fruit itself. Like the puppet master of olfaction, cannabis puts on an elaborate display of aromas playing the part of the most delicious fruits and spices nature has to offer.

How does one take full advantage of the delicious fruity esters? The two banana compounds that scientists have detected in cannabis for sure, 2-methyl-4-heptanone and hexyl acetate, occur at low levels, and have low boiling points. 2-methyl-4-heptanone boils at around 311 °F, and hexyl acetate boil at 340 °F. Compared to beta-caryophyllene (510 °F) and linalool (388 °F), the banana terpenes not only volatilize more quickly, but high temps make them decompose into give nasty, acrid flavors completely unlike the fresh product.

The best way to conserve those fruity flavors is to turn the vape way down to around 340 °F or less. For dabbers, this means putting waiting longer than normal for the nail to cool down, enough so that a puddle of oil always remains without vaporizing. Smoking banana and pineapple flowers will denaturize most of the fruity flavor, but you won’t be disappointed. If you keep your nose peeled for those intoxicating banana and pineapple scents, you’ll be sure to find some great flower or dabs, just remember to keep the temperature down for the fullest flavor.

So there you have it – a slightly complicated but none the less interesting science behind why your weed smells like it does!