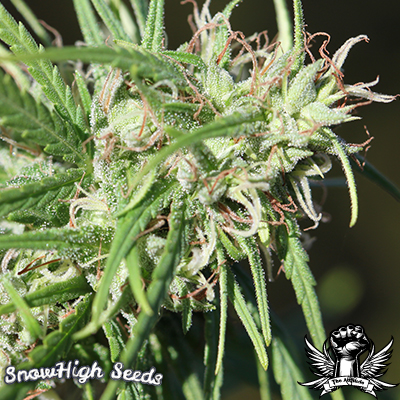 A BCO Panama Red mother was combined with a heirloom Jamaican Lambs bread male. This is a pre-release of truly old heirloom genetics of long flowering duration. Extreme patience is needed to grow and finish the Panama Red x Lambs bread, this will probably be the last strain to show sex or finish during a growing season outdoors and most likely will need a greenhouse or supplemental lighting to finish. The genetics contain many equatorial sativa types with dominance in Panamanian/Colombian genotypes, flowering and finishing times are determined by its genetics over photoperiod. A good vegetative growth is required before flowering should be induced if indoors and 30 to 60 days is preferred and sometimes 90 days from seed optimally but required. In my experience allowing the plant from seed to mature fully before inducing flower will allow larger yields and less problems with growth and finishing further in its growth cycle. The Lambs bread line is a tightly kept strain which was preserved by Rastafarians for many years. Lambs bread was a favorite of Bob Marley which is said to be a hybrid of some of the first indentured Indian cannabis cultivars brought in from traveling sugar plantation workers in the 1800’s and other equatorial cannabis lines.

Panama was once a department of Colombia with 2 provinces and many of the cannabis cultivars of Panama parallel Colombian cultivars for obvious reasons. Cuna Indians, Taino and other indigenous people of the “Americas” cultivated cannabis for religious and spiritual use and were linked with more northerly people as far as the Great Lakes region of North America and Mexico. Some of the red jungle cultivars famous for the Panama Red imports of the 60’s and 70’s possibly came from genetic sources from these people and the West African slave trade which focused around present day Angola and Senegal. Later West Indies indentured workers mainly from Barbados and other Caribbean islands came to build the Panama Canal probably brought in their cannabis cultivars from previous Indian indentured servants working the sugar plantations of the 1800’s in Jamaica and other Caribbean islands.

This strain is not for the novice and should only be grown with experience or a lot of research and preparation to realize the full potential of the strain. Those who do partake in this strains journey will be transported back in time when cannabis enhanced the mind and creative thoughts and images manifested with chances of enlightenment and joy that is rarely perceived in most of today’s cannabis strains.

Aroma: pheno dependent but citrus, sweet grass and exotic spice notes have presented themselves in some phenos

The flavor is more refined but delicious in its simplicity, a more sublime citrus bouquet

Duration of high: 4 to 6 hours depending on level of consumption

High Type: Also pheno dependent but many layers of highs come on, some slight changes in perception come on immediately and build for up to an hour or more. The highs are trippy, soaring, colorful, and intense which can be paranoid inducing even in those accustomed to potent cannabis. Sativas of this caliber are best enjoyed without consuming other cannabis strains which contain CBD which modulate the high or basically bind to the THC and other psychoactive cannabinoids and synergistic terpenoids. In some cases of cannabis use its best not to consume other CBD rich strains or narcotic pain medications because of the binding to the CB1 receptors which can decrease the perceived potency of the strain. Also consuming edibles will detract from the best expressions of sativa strains like Panama Red x Lambs bread.