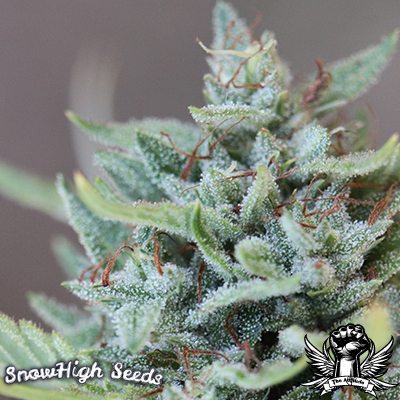 Metal Dragon is a combination of the now defunct Dutch Flowers Metal Haze with a well worked heirloom Burmese line. Dutch Flowers bred an indoor-friendly Haze strain that consistently delivered superior potency had been the very focus of Dutch Flowers breeding efforts since its inception. To that end, the team had collected and grown enough clones and crosses to setup a small Haze museum. Synthesizing the best Haze genetics into one line posed a considerable challenge. In early Dutch Flowers trials, proven clones passed down their potency genes on to the next generations using an unacceptable, unpredictable domino pattern. To develop a superior seed line, males were tested the hard way, growing out their offspring to recognize the best possible pollen source. Winning donors pollinated their choicest females, and their offspring was then heavily selected at the second generation. Recombinant individuals displaying the desired potency, phenotype, flowering and yield traits were identified and inbred into separate lines. Three years after the project begun, the resulting lines were finally blended, giving rise to Metal Haze, a hybrid that received high praise from skeptic industry testers. Named after the metal-lit room that keeps their Haze clone collection alive, Metal Haze displays the brain-warping quality that fueled the legend. It is a modern, trippy cerebral sativa, with classic psychoactive soar and scant body cues. Connoisseurs report a deadly, creeper with no ceiling, combination of effects. The phenotype is fully suitable for indoor growing, with a branching habit resulting in an abundance of dense, oily, attractive buds. Aromas range from animal sour spice to sweet piney mint, often accompanied by rotten meat undertones. Overindulging the Metal Haze is not recommended for the sativa sensitive or the inexperienced. It is a deceptively smooth smoke that starts out uplifting and super-active -ideal for musicians and creative types- and climbs ever higher in a succession of intense waves, taking perception to uncharted lands. Dutch Flowers bred Metal Haze to earn its place in discriminating gardens, and to satisfy demanding sativa aficionados. The Burmese in Metal Dragon is a broad leafed large central cola structured strain with a bushy structure that forms large resinous floral clusters. Burma now Myanmar is in close proximity to Yunnan China which is renowned for its broad leafed Chinese Indica strains. The Burmese is structured like a Chinese Indica but with an uplifting soaring high affect that people associate with equatorial lines or what is broadly referred to as Sativa. Metal Dragon brings the hard hitting sativa influence from the Metal Haze genetics while gaining size and girth from the Burmese side without it affecting the high type in a negative way.

Flower time range 8 - 9 weeks
Indica Structured Sativa hybrid
Stretch 1 to 2x
Resin production: High
Odor: 8
Aroma: Grapefruit, Sweet Skunk, Rotten meat, Lemon Grass
Flavor: 9
The flavor is potent terpene aromatic fuel which people are familiar with that are accustomed to high potency cannabis cultivars. This one tickles the nose from its aroma.
Potency: 9
Duration of high: 3 to 4 hours
High Type: An immediate body and soaring head high which is very potent and euphoric, clear up and visual but easily overdone if consumed too fast. Dry sieve of Metal Dragon will have you curled in the fetal position, hiding from cartoon monsters.